These Are the Top 20 Cities Americans Are Ditching


Soaring costs of living meant residents left New York City and its suburbs in droves
by Erin RomanWei Lu Bloomberg.com
New York City, Los Angeles, Honolulu: They're all places you would think would be popular destinations for Americans. So it might come as a surprise that these are among the cities U.S. residents are fleeing in droves.

The map below shows the 20 metropolitan areas that lost the greatest share of local people to other parts of the country between July 2013 and July 2014, according to a Bloomberg News analysis of U.S. Census Bureau data. The New York City area ranked 2nd, losing about a net 163,000 U.S. residents, closely followed by a couple surrounding suburbs in Connecticut. Honolulu ranked fourth and Los Angeles ranked 14th. The Bloomberg calculations looked at the 100 most populous U.S. metropolitan areas. 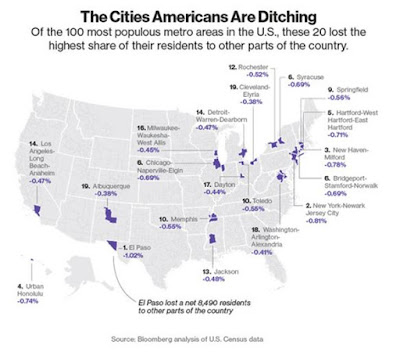 Interestingly, these are also the cities with some of the highest net inflows of people from outside the country. That gives many of these cities a steadily growing population, despite the net exodus of people moving within the U.S.

So what's going on here? Michael Stoll, a professor of public policy and urban planning at the University of California Los Angeles, has an idea. Soaring home prices are pushing local residents out and scaring away potential new ones from other parts of the country, he said. (Everyone knows how unaffordable the Manhattan area has become.)

And as Americans leave, people from abroad move in to these bustling cities to fill the vacant low-skilled jobs. They are able to do so by living in what Stoll calls "creative housing arrangements" in which they pack six to eight individuals, or two to four families, into one apartment or home. It's an arrangement that most Americans just aren't willing to pursue, and even many immigrants decide it's not for them as time goes by, he said.

In addition, the growing demand for high-skilled workers, especially in the technology industry, brought foreigners who possess those skills to the U.S.  They are compensated appropriately and can afford to live in these high-cost areas, just like Americans who hold similar positions. One example is Washington, D.C., which had a lot of people from abroad arriving to soak up jobs in the growing tech-hub, Stoll said.

Other areas weren't so lucky. Take some of the Rust Belt cities that experienced fast drops in their American populations, like Cleveland, Dayton and Toledo, even though they are relatively inexpensive places to live. These cities didn't get enough international migrants to make up for the  those who left, a reflection of the fact that locals were probably leaving out of a lack of jobs.
This is part of a multiple-decade trend of the U.S. population moving away from these manufacturing hubs to areas in the Sun Belt and the Pacific Northwest, Stoll said. Retiring baby boomers are also leaving the Northeast and migrating to more affordable places with better climates.

This explains why the majority of metropolitan areas in Florida and Texas, as well as west-coast cities like Portland, had an influx of people. El Paso, Texas, the city that residents fled from at the fastest pace, also saw a surprisingly small number of foreigners settling in given how close it is to Mexico.

"A lot of young, reasonably educated people are having a hard time finding work there," Stoll said. "They're not staying in town after they graduate," leaving for the faster-growing economies of neighboring metro areas like Dallas and Austin, he said.

Methodology: Bloomberg ranked 100 of the most populous U.S. metropolitan areas based on their net domestic migration rates, from July 1, 2013 to July 1, 2014, as a percentage of total population as of July 2013. Domestic migration refers to people moving within the country (e.g. someone moving from New York City to San Francisco). A negative rate indicates more people leaving than coming in. International migration refers to a local resident leaving for a foreign country or someone from outside the U.S. moving into the U.S.

Most Americans suffered serious losses during and after the recession, knocked off balance by layoffs, stagnant pay and the collapse of home values.

But apart from the super-rich, one group’s fortunes appear to have held remarkably steady: seniors.

Supported by income from Social Security, pensions and investments, as well as an increasing number of paychecks from delaying retirement, older people not only weathered the economic downturn that began in 2007 but made significant gains, a New York Times analysis of government data has found. 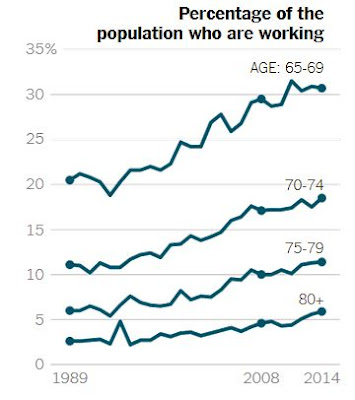 If you're looking for a job, caring for an aging parent, are worried about memory loss, have arthitis pain, planning a vacation or even want to continue your education, the information you need is at RetriedBrains.com.

The complete resource for boomers, retirees, and those planning for retirement is and has been the mission of RetiredBrains.com